By bringing together volunteers’ knowledge, enthusiasm and the expertise of professionals the unique Observatree project is helping detect many plant health threats at the earliest stages and making a major contribution towards protecting UK trees and habitats.

Initially funded for 4 years by EU Life, Observatree’s aim is to protect the UK’s trees, woods and forests from new pests and diseases either arriving or spreading across the country. The earlier these are spotted, the higher the chances that outbreaks can be eliminated or controlled.

With increasing numbers of pests and diseases arriving in the UK and several hundred highlighted on the UK Plant Health Risk register, ensuring extra eyes on the ground was likely to be a positive step forward in complementing the work of the plant health professionals. 'From little acorns do mighty oak trees grow' and the Observatree project partnership is no exception having developed a successful network of more than 230 trained Citizen Science volunteers.

The Woodland Trust recruited an enthusiastic team of volunteers in 2013 who needed dedicated training before they could begin the surveillance and reporting tasks. Observatree couldn’t possibly train the volunteers in all major tree pests and diseases (P&Ds) so is working with the UK Plant Health Risk Group (who maintain the UK Plant health risk register).

By identifying those P&Ds of greatest concern we were able to identify a priority list which had the potential to cause the most serious and widespread impact on trees and habitats. This gave us 21 priority pest and diseases including some familiar ones such as Ash Dieback (Chalara fraxinae) and Horse Chestnut Leaf Miner (Cameraria ohridella), to perhaps those less familiar such as Red-necked Longhorn Beetle (Aromia bungii) and Sweet Chestnut Blight. (Cryphonectria parasitica).

How did we do it?

Volunteers received annual training on the priority pest and diseases, host identification, biosecurity, surveillance, recording findings and using the Forestry Commission’s web based reporting tool. The training was delivered through webinars and field training workshops, backed up by online training resources. APHA’s Plant Health & Seeds Inspectorate continue to be a key partner in delivering workshops and mentoring sessions and in sharing inspection skills and experience which enables volunteers to complement the work of the plant health services.

What has the project achieved?

The Observatree project was named best community/volunteer initiative at the Horticulture Week awards at Woburn Abbey on 28 June. The nomination was for the great work the project’s volunteers did following the first OCGW outbreak (Oriental Chestnut Gall Wasp Kent 2015), and for their wider surveillance activities. 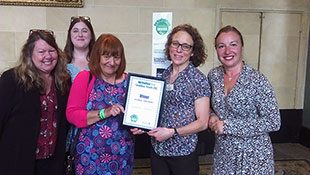 This award recognised the value of volunteers in delivering surveillance alongside plant health services. It also reflects the enthusiasm and key input by Plant Health Seeds Inspectorate in developing the volunteers and local networks.

Observatree was also awarded the Defra data pioneer award for work in responding to the OCGW outbreak.

What makes it successful?

The success of the project has been shaped by dedicated volunteers and ongoing training by building strong relationships and networks, through input from enthusiastic professional experts and continued effective partnership working.

The EU funding comes to an end in autumn this year and we are planning to build on the success of the current project by developing Observatree II. We began this relaunch by hosting a parliamentary reception at Westminster last autumn which was well attended and celebrated the Observatree achievements to date.

What is the role of Citizen Science more widely?

Myself and colleagues recently attended a workshop “The Future of Tree Health Citizen Science: Opportunities and Challenges” jointly hosted by Defra and Imperial College London

The workshop was an integral part of the Defra funded research project on citizen science and tree health in the UK, led by Dr Nidhi Gupta based at Imperial College London. It brought together around 30 people with an informed interest in tree health citizen science, ranging from:

Working in these groups we heard about progress to date and discussed three key themes:

Collation of results from the workshop, together with information from phone interviews will be collated and will inform future approaches to citizen science.

Interest in Citizen Science projects such as Observatree, and recognition of the benefits they can bring in complementing professionals’ activities is growing, both here in the UK and more widely in a global context.

This is a theme which was picked up at the ‘Observatree: Pioneering Tree Health Citizen Science in the UK end of project conference’ in September at the Royal Botanic Gardens, Edinburgh.

The Observatree partnership involving APHA in Citizen Science is an excellent example of enhancing plant health biosecurity by utilising the collective force and enthusiasm of others, but also through the lessons learned it’s becoming a model approach for others here and internationally to consider following.

It’s been an active and rewarding journey growing the first 'little acorn', on their way to becoming the 'mature oaks' of the future.

Many thanks to everyone who’s been involved in the Observatree project so far!

Visit the Observatree website to find out more about the project.