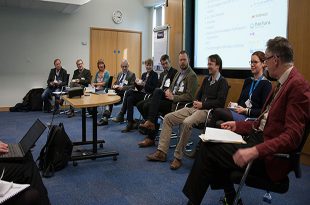 If you find yourself tucking into a bacon sandwich this Saturday morning, or enjoying a plate of bangers and mash one evening next week, it’s unlikely that you will be considering the health and wellbeing of the pig you are eating.

Whilst thoughts such as these may be far from British pork consumers’ minds, here at APHA we take the health of Britain’s pigs and the cleanliness of their surroundings very seriously. Evidence of this can be seen from a recent workshop held at APHA Weybridge, to which key stakeholders were invited to contribute and learn about our work on pig health and hygiene in the UK. Unfortunately bacon sandwiches were not provided!

The day-long workshop focussed on the bacterium Salmonella, which is subject to extensive monitoring, surveillance and research by APHA. Salmonella may have been more commonly associated with eggs historically, but pigs too can carry this bacterium in their intestine, and infected pigs can pose a risk to public health.

Attendees to the workshop were told about a recent vaccination trial against Salmonella in pigs by one of our senior epidemiologists, Dr Richard Smith. A live-vaccine was trialled in sows from eight farms specialising in the whole process of pig breeding to production of slaughter pigs. After repeated sampling over a whole production cycle, results were compared with eight similar farms in which no intervention took place. Vaccination was shown to reduce the occurrence of Salmonella infection in the vaccinated pig herds. It is research such as this that highlights APHA’s important contribution to the control of Salmonella, with the aim of minimising contamination of pig meat destined for human consumption.

The workshop also considered antimicrobial usage and resistance in pig farms; here in the UK, and also thanks to our valued international speakers, in The Netherlands, Denmark and Norway – all important pork-producing countries.

Whilst the use of antimicrobials can help to maintain pig health, over-use can be problematic. The undesirable bacteria that are not killed by antibiotics become increasingly more numerous and difficult to deal with as their resistance evolves. The UK pig industry has started several initiatives to reduce the need for antibiotic treatment, and the numerous advantages of reduction of antimicrobial use were discussed in the expert panel session at the end of the day.

Dr Lene Lindegaard of the Danish Agriculture and Food Council provided the workshop with words of wisdom regarding lessons learned from many years of experience in achieving impressive levels of hygiene in Danish abattoirs. These included targeting specific steps in the abattoir process that represent a particular risk in terms of Salmonella contamination. Using the appropriate amount of water in a de-hairing machine can be crucial for instance in ensuring waste does not accumulate and scalding and singeing of carcases must be done at the correct temperatures. It is also important that care is taken to ensure the equipment and procedures used to process carcasses after slaughter are subject to verifiable high levels of hygiene.

Dr Carl Andreas Grøntvedt from the Norwegian Veterinary Institute gave a fascinating overview of Norway’s unique strategy of dealing with livestock-associated MRSA. These bacteria are resistant to the majority of beta –lactam antibiotics, drugs that are important for treating infection in man, and variants of MRSA are reported in livestock. In Norway, pig herds that are infected with these bacteria are ‘stamped-out’ (culled), and follow up testing is carried out to confirm that the farm is clear of infection after intensive cleaning and disinfection. This type of approach would not be easy to apply in the UK pig industry, which is much larger and more complex than the Norwegian one, but stakeholders in the audience had many questions for Carl on the Norwegian LA -MRSA experience.

This workshop highlights the extensive surveillance and research carried out by APHA on Salmonella and antimicrobial resistance. Events such as these help to foster the important international network of scientists who are working hard to make the pork we eat as safe as possible, and according to feedback received, the workshop was a great success.