The site is the main veterinary research and laboratory testing facility for the Animal and Plant Health Agency (APHA), and the home of the Veterinary Medicines Directorate (VMD).

Chris Hadkiss, the chief executive of APHA, officially marked the occasion by unveiling a plaque on the front of our iconic main building.

This plaque commemorates the laboratory’s 100 year history at this site since it was first known as the Addlestone Institute.

Over the decades, there has been extensive development of the site to provide new buildings and laboratories in response to the agency’s expanding research and diagnostic function. Some of our facilities are unique nationally, if not internationally.

Today Weybridge is internationally recognised as a veterinary research and laboratory testing facility with around 800 people covering a wide range of veterinary and scientific expertise, as well as skills in administrative support and animal husbandry.

The people who work, and have worked at the site, make up a fascinating history of government veterinary research from their achievements over the years in protecting both animal and human health; some very high profile.

Here we capture some of these milestones: 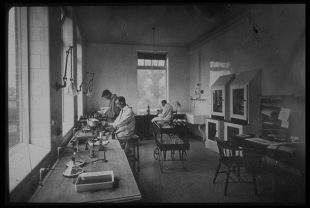 Soon after the Addlestone Institute opened, its laboratory work was extended to include rabies diagnosis after the disease returned to the UK in 1918.

The disease was eradicated again in 1922 and since then the laboratory has become an international reference laboratory for rabies; supporting overseas disease eradication projects and providing a testing service for the Pet Travel Scheme.

In 1926, the laboratory’s scientist, T.M. Doyle described a new poultry disease which he named ‘Newcastle disease’ after it was discovered near Newcastle-upon-Tyne.

Vaccine production was a priority during the Second World War, and the laboratory prepared a high volume of anthrax vaccine to protect the country in the event of biological warfare.

Since the early 1900s, the laboratory has been involved in the diagnosis and research of brucellosis; producing testing reagents and diagnostic kits. The Central Veterinary Laboratory (CVL) (as the site was known for many years) was designated a Brucellosis Centre by the World Health Organisation, and the Food and Agriculture Organization of the United Nations.

The UK was faced with a foot and mouth disease (FMD) outbreak in October 1967 which lasted until June 1968.

These were the early days of using epidemiology to support disease control measures and CVL demonstrated how weather conditions were affecting the spread of the FMD virus.

The agency provided large scale laboratory testing and epidemiological support again during the FMD outbreaks in 2001 and 2007.

With advances in IT and data sciences, the laboratory developed a computer system for data analysis providing information on diseases by area and species collated by the veterinary inspection service.

The 1980s saw the start of a growing interest in food safety and CVL’s remit expanded beyond ‘the farm gate’ to tackle disease in the food chain to protect the consumer. The CVL’s remit expanded to work on food-borne bacteria such as Campylobacter, Salmonella and E.coli.

CVL pathologists characterised this condition as bovine spongiform encephalopathy (BSE). After following the detailed geographical analysis of the spread of the disease, they were able to link the disease to cattle feed containing a scrapie-like agent in meat and bone meal.

Weybridge continued to lead on the diagnosis and research of transmissible spongiform encephalopathies (TSEs) throughout the 1990s, and set up a TSE Archive to collect and store tissue and fluid samples to support international studies.

Throughout its history, Weybridge has been at the forefront of research on bovine TB. During the Second World War work began on the large scale production of tuberculin for bovine TB testing and by 1961 the laboratory was recognised as the largest producer of tuberculin in the world.

Achievements in recent years have included the genome sequencing of Mycobacterium bovis (the causative agent of bovine TB) in collaboration with the Institute Pasteur and Wellcome Trust Sanger Institute, followed by the development of Badger BCG; the first licensed badger TB vaccine to support Defra’s Badger Vaccination Deployment Project.

The agency has an extensive history in tackling viral diseases going back to the 1890s when a small veterinary diagnostic service was set up in the basement of Whitehall to tackle swine fever, 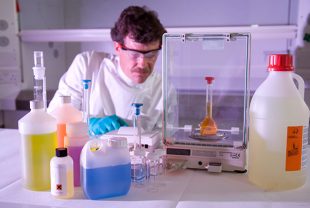 Our scientists today continue to deliver research programmes on a range of exotic viruses. Our diagnostic services completed large scale sample testing during the outbreak of avian influenza during the winter of 2016/17, and the bluetongue outbreak in 2007.

We provided scientific support for international government organisations in response to the human influenza pandemic in 2009, and confirmed the first case of H1N1 influenza in pigs in the UK.

Weybridge today is part of the Animal and Plant Health Agency and continues to play a key role in helping the agency meet its aims and objectives in safeguarding animal, bee and plant health.

The people who work and have worked at the laboratory over the years have much to celebrate and be proud of.

To read more about the history of the Weybridge laboratory, take a look at the APHA's press release and the Government Vet blog.