Almost the day after you pack away the final box and hand your little patch of the Chelsea showground back to the Chelsea pensioners, planning starts for the following year’s show. The impact of the previous show is assessed and, based on the outcome, the decision whether to go the following year can be made.

In 2015 we had some wonderful feedback from our “Beyond our Borders” gold winning fresh garden and were ready to pick up our spades again for the following year. However, we were unable to secure sufficient funds by the submission deadline for 2016 so decided to break for a year and try for 2017. 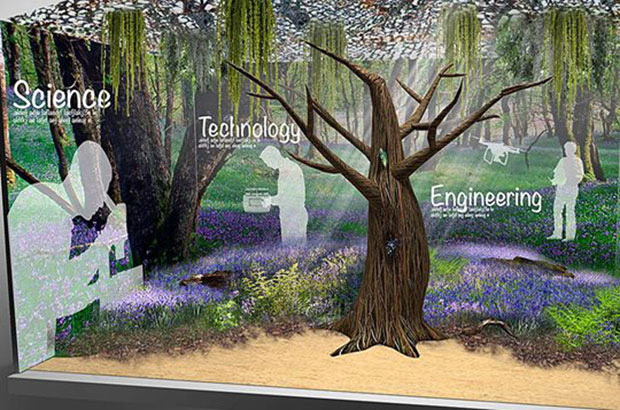 The plan was to have an exhibit in the Chelsea grand marquee discovery zone. However, unlike previous years, when we had a designer and contractors on board to help with sourcing plants, material and construction, the funds didn’t stretch that far, so we took the plunge to ‘DIY’.

In June 2016, our small team within APHA put on their creative hats to come up with a suitable theme. After a lot of discussion, a STEM (Science, Technology, Engineering and Mathematics) theme seemed like a good approach. This theme would enable us to show how government, businesses and individuals are using science, technology, engineering and maths to protect the country from threats to tree and plant health, thereby building a strong and healthy environment.  At the time, there was also a lot of government emphasis on encouraging young people to go into STEM-based careers.

All applications to exhibit at Chelsea require a detailed description of the garden design and graphic. The judging of all exhibits includes an element of how close the exhibit matches the original application. 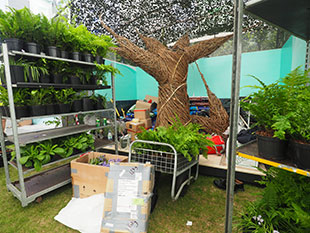 We decided to recreate a typically British woodland scene, with accompanying flora and a centre-piece of a beautifully woven willow tree made up of many “stems” to highlight the synergy of environmental strength when these are bound tightly together. The tree contained pockets where invasive beetles peeped out, representing the threats to plants and trees from pests and diseases. 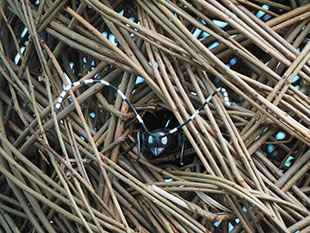 Videos showing how different aspects of STEM are being used to detect, manage and eradicate plant pests and diseases were to be projected over four projector screens on a backdrop – flowing from one to the next on a continual loop. At this stage we brought in a colleague from Natural England with a lot of experience in setting up equipment for large events together with an associate to build the core structure of the exhibit.  Using this resource really helped us keep within our budget.

By August our application had been written and submitted and two months later we heard it had been successful. We were over the first hurdle! 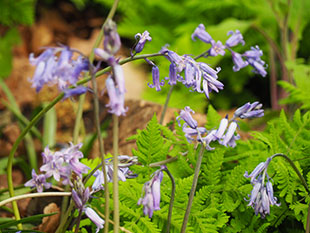 When we applied, the idea of having a beautiful swathe of flowering bluebells sounded idyllic - but that was from someone who is a plant pathologist, i.e. someone who normally looks at dead and dying plants – not a good start-point for a Chelsea display! Speaking to colleagues who actually knew something about growing plants resulted in sharp intakes of breath as the flowering season for bluebells is usually over by the time the show is on.  We therefore had to look at possibility of holding them back a little.  We threw a challenge open to 100 of our Defra colleagues to grow their own bluebell for the show.  Detailed growing instructions were provided for our “Bluebellers” to attempt to hold back flowering for one month.  Sourcing enough pure native bluebells (not the Spanish invaders, or their hybrids) was difficult to say the least. We did eventually find enough and, by the beginning of December, had distributed them to our volunteers, with the remaining 400 planted in a glasshouse to simulate Autumn. 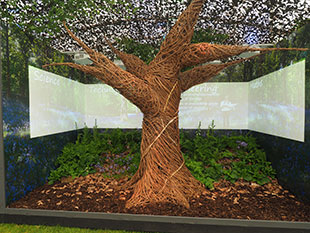 Our next challenge was to film the videos. I donned my director’s hat and made sure our volunteer Plant Health and Seeds Inspector (PHSI), Oscar Martinez-Fabris, was ready for his screen debut.

For science and technology we filmed Oscar using traditional methods such as microscopy as well as more modern in–field technologies such as our portable molecular diagnostic equipment which is used to rapidly detect new pathogens. Flying a drone for the engineering section was challenging indoors but Oscar, a qualified UAV pilot, made it look easy.  For maths we filmed Oscar using a board to highlight how modelling and geographical information systems can predict and show the extent of plant disease outbreaks.

In order to get the lighting level correct to project the videos the exhibit had to be covered with some sort of canopy. We decided on a mix of artificial camouflage netting and real silver birch trees. 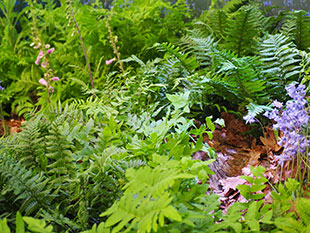 By now the bluebells were growing well and were in a simulated Winter period. Other plants for the exhibit, such as ferns and primulas, were sourced and we started work on the leaflet which would highlight the exhibit and explain our key messages to visitors. Around this time our willow tree sculptress rang to say the tree was ready and could it be picked up quickly as birds were trying to nest in it!

It was now spring for the bluebells in the glasshouse (and late spring for the rest of us). I could see the flower buds forming – all was good. Or so I thought…

A couple of weeks later I want back to check the bluebells – they were dead!

Luckily, after a few frantic phone calls we were able to source replacements. So, after filling up our van with plants and an extensive selection of gardening tools, we were on our way to Chelsea. 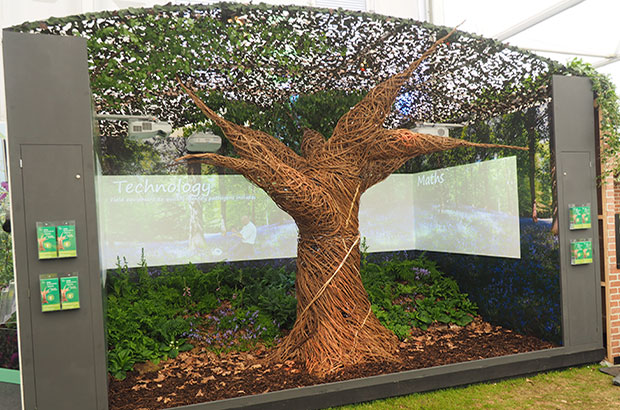 It was fascinating to be part of the show set up and, with the help of a former garden designer turned PHSI, our woodland scene came together very nicely.

The videos worked perfectly and the bluebells remained in flower. Dead leaves were scattered over the base to give the appearance of having naturally fallen last season, although they were actually hand-placed individually and dusted!! Recorded birdsong emanated from the willow tree, attracting our very own wood pigeon that sat on the top of the exhibit for most of one day, making it a true Animal and Plant Health Agency exhibit. 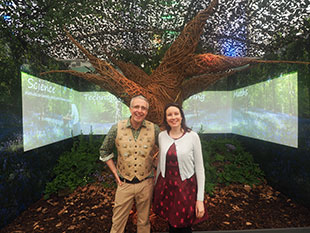 We had many thousands of visitors throughout the week, including Defra’s Chief Plant Health Officer Professor Nicola Spence and Permanent Secretary Clare Moriarty.  Everyone loved the exhibit and the messages behind it, including the RHS judges who provided us with great feedback and awarded us a bronze medal.  We have lots of follow up and evaluation to do, as well as considering options for 2018…

There are so many people that I and the team would like to thank for helping us make such a success of this year’s exhibit.

The path to the RHS Chelsea Flower Show is often a long, winding and occasionally uncharted journey but it always leads to a well-received and popular exhibit, which highlights to visitors how they can do their bit to help to protect our trees and plants from harmful pests and diseases.