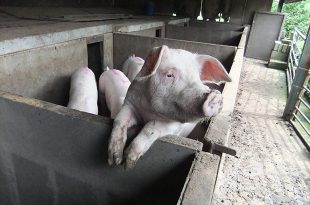 Salmonella is a bacterium infectious to both animals and people which continues to have an enormous impact on both human and veterinary public health as well as the economy in the more economically developed countries, despite extended control programmes.

Across Europe, around 100,000 salmonellosis cases in humans are reported each year, with an estimated annual cost of €3 billion.

While other pathogens may cause IID in humans, salmonellosis resulted in the highest number of hospitalisations, with 90% of those cases having acquired the infection through the consumption of infected food items.

The study trialled 3 interventions in outdoor reared pigs and sought to provide evidence for a range of effective controls for different farms and improve Salmonella knowledge in the pig industry.

One of the many challenges of Salmonella control is the bacteriums ability to persist, and sometimes to multiply, in the environment and that rodents can spread the bacteria after cleaning and disinfecting pig housing.

A cost-benefit analysis of previously investigated interventions (for example feeding fermented liquid feed, coarsely ground meal), and the three interventions trialled here, showed that none of these resulted in a neutral or positive economic impact on pig production, which may hamper their uptake by farmers.

Current work is focusing on seeking more cost-effective ways of controlling Salmonella (such as applying vaccination at the farms at the top of a pig production chain), or on identifying additional benefits of interventions on other production-limiting conditions.

All of the 3 interventions proved to be useful in combatting Salmonella infections on pig farms but none of them were entirely successful on their own. Effective biosecurity on farms remains one of the simplest ways to reduce the risk of pathogen spread and this should form the basis of any Salmonella control plan and be used in tandem with these interventions.

The knowledge gained through this study was added to a new on-line tool produced by AHDB-Pork, aiming to engage farmers with biosecurity by testing their knowledge and providing advice in an interactive manner.

The mobile app shows short clips of outdoor and indoor farms and asks the user to click when they see a biosecurity risk, much like the driving theory hazard perception test.

The project team also ran a series of seminars for pig producers, their vets and other interested parties to inform them of the study results and raise awareness of effective Salmonella control.

This APHA work has shown that combining education and research can be an effective strategy for combatting a bacterium that causes significant ill heath in humans.

Download the AHDB-Pork mobile app from:
play.google.com or apple.com